A big news came out from Solan district of Himachal Pradesh. Here the cable car got stuck in the middle of the Timber Trail ropeway. 15 people were trapped in 2 cable cars, who were later rescued. This cable car was stuck for a few hours due to a technical fault at the TTR Resort Parwanoo in Solan. NDRF team was called to rescue the passengers. 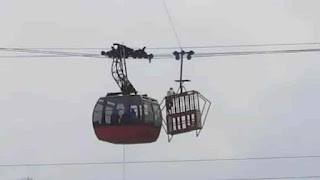 Several tourists got stuck in the air due to a technical fault in a cable car in Himachal Pradesh’s Parwanoo. After three hours of effort, everyone has been evacuated safely.

After the cable car got stuck, a technical team of timber trail operators were deployed and a police team monitored the situation.

Chief Minister Jai Ram Thakur said that all the 11 people have been safely evacuated. The rescue team faced difficulties due to bad weather. I would like to thank Home Minister Amit Shah for rushing the NDRF team to the spot at the earliest and keeping the Air Force on alert to rescue the stranded people.

The incident brought back memories of October 1992, when 11 passengers were stuck on the same ropeway. He was later rescued by the Indian Air Force.

A major accident happened on this ropeway even 30 years ago. In 1992, about 10 lives were trapped in a cable car on this ropeway for three days. Then the soldiers of the Army and Air Force played on their lives and rescued the trapped people. The sad part was that one person had died in that accident.

In April this year, three people were killed in Deoghar district of Jharkhand after tourists were trapped in cable cars for over 40 hours.